How to Deal with An Aggressive Cat 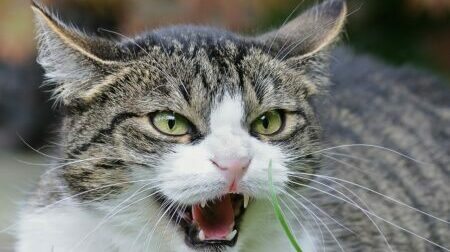 We hope you love the products we recommend! Just so you know, we may collect a share of sales or other compensation from the links on this page at no additional cost to you. Thank you if you use our links, we really appreciate it!

Aggression is one of the most common and serious feline problems that give cat owners a hard time often when the cat has already advanced his aggression intensity. An aggressive cat is more dangerous than a similar dog despite the animal size difference.

An aggressive cat can use a total of five ‘weapons’ to scare off or fight the opponent. He can use his mouth and the four claws leading to serious bites and scratches.

Most animals display aggressive behavior when offended, anxious or fearful and they normally do so to protect themselves and their territory, guard their children among other reasons. Mild aggression behavior in cats is quite normal and is displayed when the cat is triggered to an extent that he fights for his safety.

However, if your cat is displaying abnormal aggression even on petty issues, you need to consider ways of addressing the problem for your safety and for all who interact with your cat. Despite the reason that triggers this behavior in your cat, the tips on how to deal with an aggressive cat is generally effective in all scenarios.

The effects of combating an aggressive cat can range from minor injuries to more complicated infections like a cat-scratch disease to humans. Aggressive cats can also fight each other but rarely do they result in serious injuries but you will spend more money on veterinary visits for this case.

It is recommended that every cat owner should try and understand their cat’s body language at least on a medium level. Cats will always communicate by sound and body language. Cat’s sound includes meowing, yowling, hissing, and growling.

The body language, on the other hand, is shown by how the cat adjusts certain parts of his body, facial expression, general body posture. An aggressive cat will use a combination of sound and body language to pass his message of dissatisfaction before resorting to fighting or fleeing.

2 Types of Aggression in Cats

There are two types of aggression shown by cats, offensive and defensive. During offensive aggression, your cat will try to make himself look big to scare you or the other cat. The postures adopted by cats in this type of aggression may include a combination of the following:

If your cat exhibits these postures of aggression, avoid touching him completely and do not punish him. Try as much as possible to create a calm environment and you can even slowly walk away from him if things are escalating.

In defensive aggression, your cat will take on a small and humble-like posture to protect himself from the opponent.

The body postures of defensive aggression in cats may include a combination of the following:

In extreme situations, an aggressive cat will scratch the opponent regardless of whether it is aggressive or defensive.

Cats are naturally playful and with aggression, it is important to realize that there must be a reason that makes your cat show aggression.

7 Reasons Why Your Cat Is Aggressive

The following are the main reasons why a cat might exhibit aggressive behavior. It can be one of them or a combination of two or more.

Without a doubt, pain is a major cause of aggression in cats. When the cat shows hostility to humans, it is often that the human is responsible for inflicting some pain to the cat. A cat in pain will produce a hissing sound with levels depending on the pain inflicted on him.

If you notice your kitten is suddenly becoming aggressive, you need to rush him to the vet for a check-up. Cats have the habit of hiding sickness which might turn out to be dangerous if left unchecked. If your cat is experiencing pain in specific areas of the body, he will be aggressive in a bid to prevent you from touching the area.

An environment that creates stress and anxiety in your cat will make him aggressive in his behavior. A stress-causing environment can be one where the family members are always in quarrels and fights or where you have too many cats in the house with no decent place to keep them.

Other reasons that cause stress and anxiety in cats include;

You need to learn the early signs that cause anxiety which leads to stress in your cat. This measure is critical in ensuring that your feline friend does not develop into a dull and aggressive pet.

Your cat will resort to offensive aggression to protect his territory from humans and other pets. If your cat sees other cats freely walking in your yard through the window, he will be upset and may try to combat them.

The addition of other pets in your household may also trigger aggression in your cat. The same applies when you have visitors and strangers who frequent your house.

Hormones can be a cause of aggression in your cat. Male cats can easily fight over a female cat on heat and that is solely biological. A good way to reduce aggression during this period is by spaying or neutering your cat.

If your two male cats are fighting, it is recommended not to physically intervene because you might be a victim where the two cats will decide to pound on you. You can distract fighting cats by using treats and toys.

If he cannot join other cats out to play and chase the birds, he will redirect his frustrations by becoming aggressive to the pets inside the house and humans also.

A good way to address frustrations that may arise from immobility is by adding a cat door to strategic positions in your house. This will permit your cat to freely move in and out of the house at his pleasure.

Sometimes aggression in cats can result from petting; your cat will strike you with his claws for trying to pet him. An explanation for this can be that you touched a place where your cat is experiencing pain and hence triggered him to fight back.

Also, your cat can be overstimulated by the petting such that it now turns to itchiness that needs to be avoided.

In other scenarios, your cat might be sending a message to you that he is now satisfied with the petting session and you need to stop now. Irrespective of the petting-induced aggressiveness, it is important that all cat-owners learn how and where to pet their kitties. Nonetheless, cats rarely experience this reason as a cause for their aggression. Regular visits to the vet are very crucial because such cases can be identified early enough. If your cat has this condition, then the vet will recommend antidepressant drugs which will help your cat a lot.

As we have seen from the above reasons, cats do not suddenly become aggressive without a particular cause. Despite the reason that makes your cat have aggressive behavior, the procedure of dealing with him is quite standard and if followed well it will work.

8 Tips on How To Deal With an Aggressive Cat

To be sure that your cat is not being aggressive for medical and biological reasons, you need to visit a vet. There are some diseases including those affecting the central nervous system that may make your cat display aggression.

In this case, your vet will prescribe treatment for the disease and eventually handle the aggressive behavior. If this is not the case, you can try the following tips to stop a cat from being aggressive:

1. Just avoid the situations that you know will make your cat aggressive. If you have brought new pets into your house, it is very common for your cat to show aggression. In this instance, you need to take your time and get all your pets to play together to foster familiarization.

2. If you know that your cat has been hit by something, avoid touching or petting him. Just give him time for the pain to go down.

3. Do not give a treat to your cat when he is very aggressive. Instead, just wait until he has calmed down then give him a treat. This will inform the cat that you are not pleased with his aggressions and rather, calmness is rewarded.

4. Insert cat doors at strategic locations in your house. Your cat needs the freedom to move in and out of the house when at will. Having a cat door will reduce the aggressive behavior caused by frustration and it will also reduce excessive meowing by your cat on the main door.

5. Always note the cats in your household that are aggressive to each other and separate them to prevent fighting. Ensure you have different resources (cat carriers, pet bowls, toys) for such cats. To reduce the enmity between such cats, you can have a training session for both of them at the same time. Have them know each other’s capabilities and strength which will, in turn, replace the hatred.

6. Ensure that your cat has a routine that he follows every day. This will help him to be cognizant of what is expected of him at a particular time.

7. Have plenty of playing time and training sessions with your cat. This should be well catered for in the routine and you need to ensure that it is followed.

8. Consult your vet if things are not working out well. Changing behavior in cats requires consistency and patients. It is common for aggressive cats to persist with the behavior and in this instance, you need to reach out for further specialized training after consultations with your vet.

It is important to always observe and understand the body language of your cat. This helps in trying to know what your feline friend is trying to communicate to you. Aggression can be well understood if cat owners spend much time with their cats and interpret their language.

From what I have shared with you in this post, you can also add some knowledge by watching this video by E’Lise Christensen where she shows how to deal with an aggressive cat.

Has your cat ever shown aggression towards you? Did you try the tips that are mentioned in this article? Please let us know in the comments below. Thanks so much for reading through my post.