Why Do Dogs Lick Their Paws Excessively? 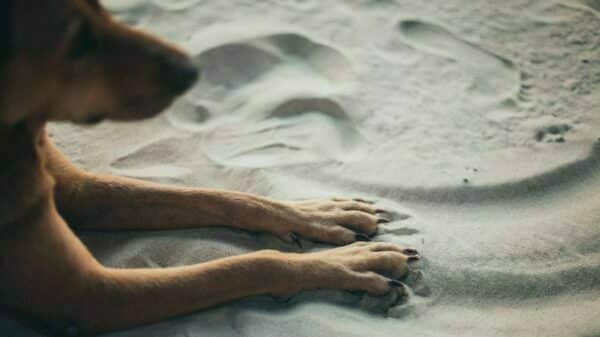 It is perfectly normal for dogs to lick their paws. This behavior would only cause an alarm when your dog does it excessively because there may be a health problem associated with it.

If you have spotted this behavior on your canines, it is important to understand why dogs lick their paws excessively and also know how to handle it.

Just like cats, dogs lick their paws as an action of self-grooming. They will do this mostly after taking their meals and before sleeping. If your dog is so concerned about being clean, you will notice that he licks his paws every time he comes from outside.

As part of self-grooming, dogs will normally chew part of their body after paw-licking. While there may be other factors that would make your dog do paw-licking once in a while, this behavior is normal and should not cause an alarm.

Excessive paw-licking is a sign that your dog might be suffering from a medical condition. In this case, you will notice your dog aggressively licks his paws with much strength. This can also be a behavioral issue that can be corrected with appropriate training.

If you suspect that your dog might be having a health problem associated with paw-licking, you will first have to examine his paws and establish whether there is any problem therein. You will often find that your dog will lick and even chew his paws when they are itchy or irritating. Your canine friend might have been stung or nibbled by an insect such as bees or another animal.

You can take care of itchy paws by doing the following:

a.  Clean and wipe the paws whenever your dog is coming from outside in the dirt.

b.  Soak the paws in water and oatmeal shampoo for about ten minutes. This will help in cooling down the itchy skin.

c.  You can boost the immunity of your dog by giving him fish oil which also acts as an anti-inflammatory.

2. Your dog might have also stepped on a sharp object which is now lodged in its paws. He will try to aggressively lick his paws in an attempt to remove the stuck object from the paw. It is easy to establish this because you will notice that your canine will limb as he walks, often raising his affected limb to avoid touching the ground.

3. Food allergies may cause paw-licking when your dog encounters food that causes irritation on his paw skin. Dogs have different allergies to different types of foods; you will have to establish the kinds of food that affect your dog’s health and try to avoid them.

4. You can have humidifiers in your house to create a moist environment to eliminate dry skin and foreign material that might cause allergies to your dog. Your vet will prescribe a diet to your dog that contains hydrolyzed protein or a novel animal-sourced protein.

5. Your dog may be having an abnormal cell growth or lump in one or more of his paws. This might be a cyst or tumor that causes cancer in the case of human beings. He might also be suffering from arthritis which causes pain in the soft tissues or the paws.

6. Your canine friend might have caught a bacteria or fungi infection on his paws. Many reasons are responsible for the development of these infections and one of them can be directly associated with dampness caused by mild paw-licking. When your dog licks his paws as normal behavior, he often leaves the paw skin warm and wet, offering a good environment for bacteria to grow.

7. Your dog might be having external parasites like hookworms on his paw skin and it may cause irritation and eventual paw-licking.

8.  De-icing salt may chemically burn the skin on your dog’s paw hence making it lick and even chew. You will see this behavior mostly in winter when this salt is applied on roads to remove the ice. During this period, you can use warm water and a clean towel to wipe off the deicing salt from the dog’s feet once he arrives from outside.

9. The formation of ice balls between the toes of your dog during winter might be a reason why he licks his paws excessively. When your dog licks his paws with ice balls, it can be very painful because of the fur pulling and sometimes bleeding involved. If your dog is very hairy, you need to watch out and prevent him from forming ice balls.

10. Your dog might be having ticks and fleas on his paws hence the attempt to remove them might cause excessive licking and chewing. You can use insecticides to remove fleas from your dog’s body. Also, ensure that your house and the kennel are thoroughly cleaned regularly to remove any breeding fleas.

As I mentioned before in the case of having a foreign object lodged in the body, if your dog focuses on one of his paws then it might be a sign of an infection.

There are situations where these infections will affect more than one of his paws at a given time. For this case, you will notice that your dog has reduced his outdoor activities, and most probably, he spends his entire day lying around while attending to his paws.

How To Handle Excessive Paw-Licking In Dogs

You now have tips and answers to the question ‘why do dogs lick their paws?‘ and the possible reasons that may cause this behavior in excess.

After you have established that your dog does this behavior in excess and aggressively, it is now paramount that you go a step higher and see what you need to do to help your canine friend.

You need to first perform a critical examination of the paws your dog is licking excessively. Take a very close look at how your dog responds when you first touch the paw. He may be agitated with pain and bark a little and therefore there is a need to be very careful in this case. Due to excess saliva, excessive paw licking might cause discoloration of hair around the affected area.

You need to contact your dog’s vet as soon as possible before figuring out what to do by yourself. The vet will determine whether the condition is medical or not and prescribe a treatment that will cure your canine friend. If the condition established is severe and might blow out of proportion if left unattended, the vet will recommend specialized treatment for your dog.

If the condition is not medical, as advised by the vet, you will then need to figure out how to address the behavioral issue.

What To Do For Behavioral Paw-Licking

Aside from the health-related issues, your dog can simply be licking his paws because of behavior he has acquired and it is now transforming into a habit and eventually becoming its character.

Your dog might just be bored and as a result, end up chewing his paws to be active. In other cases, you will find your dog licking the paws of another dog even aggressively. This behavior is commonly attributed to grooming reasons especially when seen with dogs licking puppies.

Another reason your dog can develop this behavior is fear and anxiety. When you travel with your dog to a new place, he might lick his paws since the behavior is a bit relaxing. For fear reasons, your dog will most probably hide its tail also and maintain a completely silent environment.

In the event that your dog is anxious, you need to establish the reasons for the anxiety. Detach your dog from the conditions that cause him to be uneasy. A vet may prescribe sedative medication to ease anxiety.

You might notice that your dog does more than just licking his paws, in this case the dog uses his teeth to chew his paws.

Apart from licking their paws excessively, dogs are also prone to chew their paws as a result of various factors. Again, paw-chewing by dogs is normal but sometimes the dog will do it excessively and that is when you need to be curious.

The following reasons might cause your dog to chew his paws including the ones that cause excessive licking:

Weather conditions might cause the skin on your dog’s paws to be very dry and even cracked up. Dogs are covered by hair and fur in almost every part of their external body part except for noses and toes.

It is rare to find your dog’s nose dry but as for the skin on the paws, they often become dry and cracked. In this case, your dog will chew his paws in an attempt to eliminate the dry condition which irritates.

When your dog is infested with parasites such as fleas on his paws, he struggles to eliminate them by chewing the paws. Fleas are very microscopic hence you cannot see them and so you will often misinterpret the reason for your dog’s restlessness.

This is a major reason you will find your dog chewing his paws and it provides a hint to why dogs chew their paws especially in a very discomfort manner.

While moderate paw-chewing is a normal thing, when you notice your dog overdoing this behavior you need to immediately seek the services of a vet.

Not only for paws, but you also need to check other areas of the body where your dog chews excessively. You might notice bleeding, loss of hair, or injuries in the area your dog chews. The vet will advise you accordingly on how to bring back your dog to normal behavior and health.

Five Home Remedies To Stop Your Dog From Licking Their Paws

1. Give a chew bone to your dog to play with, he will find it more satisfying to chew and lick.

2. Play with your dog regularly and take him for walks.

4. When your dog licks his paws, redirect him to an interactive toy and let him play with it for some time. Reward him with a treat for playing with the toy.

5. Give time for your dog to socialize and play with other dogs and pets.

Generally, it might take more than 3 months for a dog to change its behavior completely. You just need to keep the consistency alive and keep a note of the positive changes you are observing. In the event that your dog refuses to change his paw-licking behavior, you can consult a dog trainer or animal behaviorist.

It is always better to prevent an illness than to cure it. Why do dogs lick their paws excessively is a question that has continued to bother a lot of pet parents after it is too late to stop the behavior or cure the illness.

Below is a video by Dr. Claire Stevens where she highlights the possible reasons a dog might lick his paws excessively.

I would love to know if your dog has licked his paws excessively. Please leave a comment in the comment section down below and I will be happy to hear from you.